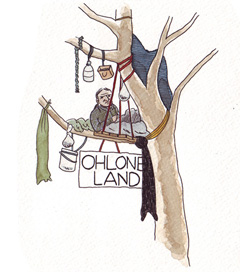 Founded by squatters more than 150 years ago, full of foreclosed buildings, and shrinking by thousands per year, Oakland in many ways presents as a tremendously attractive target for occupation. But it’s been a bumpy road since the first camps were cleared on October 26. Even when working with non-profits such as Causa Justa Just Cause, most of Occupy Oakland’s occupations ended in clearances, raids and arrests. The failed foreclosure defense at 18th and Linden Streets in West Oakland ended in half the occupiers dancing in the street and the other half hanging their heads in disappointment.

The most recent raid on ended in a city bulldozer crushing the second aquapy boat, the “OO Hope Floats.” To date, no one from the city has taken responsibility for the crushing.

Oakland is still home to many squats, but Occupy Oakland’s occupations now consist of just a cluster of tiny teepees on city hall plaza.